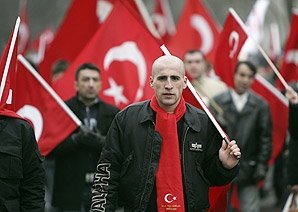 By Andrew Borowiec
THE WASHINGTON TIMES

NICOSIA, Cyprus -- An escalation of warnings about a growing Islamic threat in Turkey is putting new pressures on the government of Prime Minister Recep Tayyip Erdogan, possibly damaging its role as Washington's key ally in the area. In increasingly bitter verbal exchanges with President Ahmet Necdet Sezer, Mr. Erdogan rejected charges that he is leading Turkey away from its secular system toward Islamic fundamentalism. Mr. Sezer's latest broadside was a statement to the War Academy that "religious fundamentalism has reached dramatic proportions." Islamic fundamentalism "is trying to infiltrate politics, education and the state, it is systematically eroding values," Mr. Sezer said. "Religious people also have a right to politics. ... If you want to keep the faithful out of politics, the people will never forgive you," Mr. Erdogan said in response. "Anti-secular forces are threatening Turkey and its institutions," headlined the mass-circulation Istanbul daily Cumhuriyet. European diplomats caution that part of the campaign is aimed at the presidential election next year, with the opposition trying to discredit Mr. Erdogan's credentials. Under the Turkish system, the parliament chooses the republic's president. The nasty debate between secularist and pro-Islamic forces once again has raised the question of Turkey's candidacy in the European Union and its role as America's trusted ally. However, despite the increasingly pessimistic assessment in the press of U.S.-Turkey relations, one diplomat said, "there are still more areas of common interests than differences." Mr. Erdogan denies that his governing Justice and Development Party (AKP), which evolved from the banned Islamic Party, is "returning to its Islamic roots" or that he has "hidden Islamic agenda." "Our duty is to defend the principle of secularism without making religious people uneasy," said Deputy Prime Minister Mehmet Ali Sahin. However, diplomatic reports say the influential Turkish army is skeptical and increasingly watchful. Army generals are anti-Islamist and regard themselves to be the guardians of the republican system established in 1923 by Mustafa Kemal Ataturk. Mr. Erdogan's policies were defended by the English-language New Anatolian daily, which wrote that the prime minister and his party are trying to prove that "Turkey is the only example for the Middle East region showing that democracy can coexist with Islam." Mr. Sezer often has vetoed laws he considered to be pro-Islamic and prevented appointments of bureaucrats known for their Islamic orientation. The ruling AKP was swept to power in 2002 after a series of ineffective coalition governments accused of corruption. It claims an impressive record of halting an economic collapse, of securing Turkey's candidacy for the European Union and of improvement of political rights. Critics point out that the party tried unsuccessfully to push through plans for a greater role of Islam in education and for branding adultery as a criminal offense. It also has failed in its efforts to abolish the ban on head scarf for women in public buildings.
Eingestellt von Medforth um 1:29 AM