France is Talking with Hamas 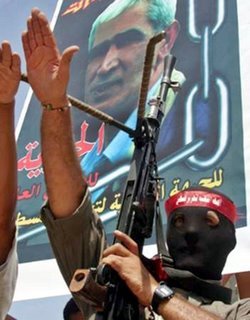 It’s time to start the countdown to the day the feckless, appeasoid international community knuckles under and grants official recognition to an Islamofascist pseudo-government openly, unapologetically dedicated to the destruction of its neighbor.
The charge toward surrender is being led by France, of course. (Hat tip: EE.)
A Hamas official confirmed on Monday that France held secret talks with its representatives on behalf of the European Union, a break in the policy of isolating the new Palestinian government.
The Palestinian source further claimed that France was attempting to improve relations between the European Community and the group that Israel had urged countries to reject.
French Ambassador to Israel Gerard Araud previously refuted the allegations made in a report submitted to officials in Jerusalem, Army Radio reported.
Israel also suspected that other countries including India, Japan and China would soon publicly recognize the Hamas-led government.
According to the report, despite the refusal of the US and Israel to negotiate with the Palestinians, the European Union, Russia and India were already holding secret or open talks with Hamas officials.
LGF
Eingestellt von Medforth um 11:54 AM