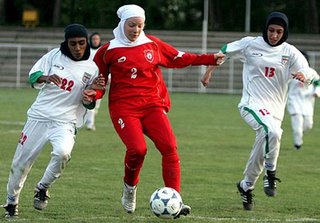 After who knows how many millions of dollars, and who knows how much wasted time, the UN’s blind, toothless nuclear watchdog agency has released their report on Iran, telling us what any human being with at least one functioning synapse has known for years: Iran ‘fails to heed nuclear call’.
Iran has ignored a UN Security Council demand to suspend all nuclear fuel enrichment, the head of the UN’s nuclear watchdog has concluded.
Mohamed ElBaradei told the UN Security Council that Tehran had done little to answer questions over its intentions.
The UN wants the research halted amid Western fears - denied by Iran - that Tehran might develop nuclear weapons. President Mahmoud Ahmadinejad said earlier Iran did not “give a damn” about UN resolutions over its research.
Mr ElBaradei, chief of the International Atomic Energy Agency (IAEA), told the Security Council that Iran had not halted its programme and had not given information on key issues. “After more than three years of agency efforts to seek clarity about all aspects of Iran’s nuclear programme, the existing gaps in knowledge continue to be a matter of concern,” his report said. “Any progress in that regard requires full transparency and active co-operation by Iran.”