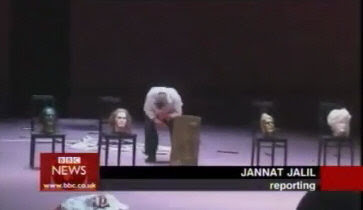 Police in Berlin are on high alert for tomorrow’s debut of Mozart’s Idomeneo (Photo), fearing an outbreak of violence from the Religion of Peace™: ‘Headless opera’ puts police on alert.
The Associated Press attributes this threat of violence to “religious sensibility.”
BERLIN - Audience members at Monday’s Deutsche Oper production of Mozart’s “Idomeneo” will be kindly asked to empty their pockets of all metal objects. And they should be prepared to leave — quickly — in case of a bomb alert.
The Austrian musical genius born 250 years ago was noted for an impish sense of humor and some directors take huge liberties with their interpretations of operas. But the security measures for the performance, which include electronic screening of opera goers and evacuation precautions, are not part of the plot.
It’s a case of art meeting religious sensibility — and a decision that the show must go on, despite concerns that the production, featuring the severed head of the Prophet Muhammad, could prompt violence.
LGF
Eingestellt von Medforth um 9:43 PM