Serbia Will Defend Kosovo by All Means Necessary 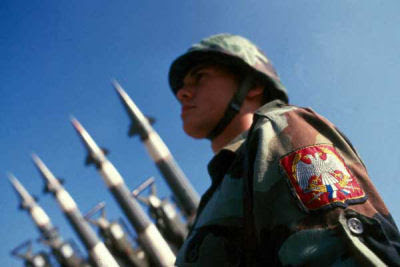 Prime Ministerial Adviser Aleksandar Simic says that there is still no solution to the Kosovo crisis anywhere in sight, but that Serbia intends to defend its province of Kosovo-Metohija by all the means it had at its disposal.
“When someone fails to respect the Security Council, the only body that ought to react in times when there is a threat of aggression and war, particularly when someone does not observe Chapter VII of the United Nations Charter and the resolution that was adopted in line with it, then there is nothing else a country can do,” Aleksandar Simic said late on Tuesday, in a live broadcast on Radio-Television Serbia (RTS).
Asked what was missing in Serbia’s daily claims that it would fight for Kosovo using all legal and political means, he replied that war was also a legal means, when no other options to defend state sovereignty and territorial integrity remained.
“Serbia has had negative experiences from the armed clashes during the civil wars in the former Yugoslavia, and this is why we are more prudent and cautious now but, of course, state interests are defended by war as well — every state has the right to defend its sovereignty and territorial integrity by all means necessary,” Simic stressed.
More:
http://byzantinesacredart.com/blog/
2007/12/serbia_considers_war.html
Eingestellt von Medforth um 5:58 PM