Picture: Czechoslovakian Sudetenland in 1938, after being handed over to Hitler on a silver platter by the Western powers. The same Western powers are today eager to hand over part of Serbia to Bin Laden’s buddies. 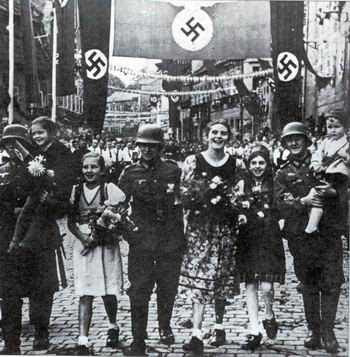 Kosovo Compromise Report
The separation of Kosovo from Serbia is now a way to pacify Islamic terrorism at someone else's expense, just as the world in Munich in 1938 at someone else's expense tried to pacify Nazism, the Czechs exiled from the Sudet region after the annexion of the Czech region in 1939 by Hitler's Germany have warned.
An open letter to the Czech public and the Serbian ambassador to Prague was signed, apart from the exiled, by a group of historians and opposition Social Democrats, led by former Czech Prime Minister Milos Zeman.
More:
http://byzantinesacredart.com/blog/2007/12/exiled-sudet-czechs.html
Eingestellt von Medforth um 10:04 AM