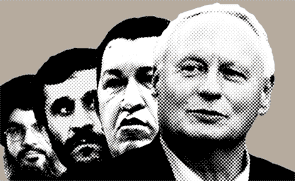 By BENJAMIN WEINTHAL, BERLIN
The Foreign Ministry has invited one of the leaders of a German political party that has been criticized for failing to fight anti-Semitism and hard-core anti-Israeli attitudes within its ranks.
Parliamentary Vice President Petra Pau, of the Left Party, will be speaking at a conference of the Global Forum for Combating Anti-Semitism in Jerusalem on Monday. She will participate in a discussion on "Government and Parliamentarian Actions in Combating Anti-Semitism."
Pau's party is the new political heavyweight in Germany, the third largest in the Parliament. It also demonstrates a "shocking hostility" toward Israel, said Dieter Graumann, the vice president of the Central Council of Jews in Germany.
More...
Eingestellt von Medforth um 3:21 AM