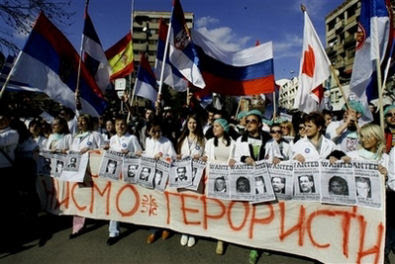 According to Serbian news agency Tanjug, hundreds of students from Belgrade, Nis and Kragujevac who left Friday morning for Kosovska Mitrovica to attend student protests there, are held at Jarinje, a crossing on the administrative line between central Serbia and Kosovo and Metohija province.
The dean of the University of Belgrade Branko Kovacevic told Tanjug that the international forces deployed in the province are refusing to allow the student buses to enter Kosovo, but that the students are determined to stay at Jarinje until they are let through.
At this moment, Serbian students are on both sides of the administrative line, since some 200 Belgrade students in two busses, who were allowed to continue towards Kosovska Mitrovica, were stopped are a nearby Kfor checkpoint and then returned towards the administrative crossing.
A group of some 60 students left the bus and walked 12 kilometers towards their Kosovo province colleagues in Kosovska Mitrovica where they were headed when they crossed the administrative line on foot. Mitrovica Serbs sent a bus which picked the students from central Serbia up 12 kilometers from Jarinje.
Serbian student protesters held at Jarinje administrative crossing, Friday, Feb. 22
UNMIK and KFOR said that, since this morning, they are allowing entry into the province from central Serbia only to the residents and their relatives, who are not expected to hold protests.
"We have opted for this move after last night's protests in Belgrade and buses carrying demonstrators are strictly prohibited entry, while those carrying citizens will be allowed," an Albanian spokesman for KPS in Pristina told the agency.
The students are headed to Kosovska Mitrovica to support their colleagues there, who hold daily peaceful protests at 12:44 CET, to underline that the latest U.S. and EU moves over Kosovo violate international law, and more specifically, UN Resolution 1244.
More:
http://byzantinesacredart.com/blog/2008/02/continued_protests.html
Eingestellt von Medforth um 1:33 PM