UN Confirms: No Transfer of Jurisdiction to EU 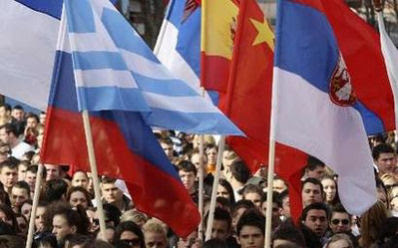 According to Tanjug, UNMIK will continue its mission in southern Serbian province of Kosovo and Metohia until UN Security Council decides otherwise, it was confirmed in New York.
UN Secretary-General Ban Ki-moon's spokesman Brendan Varma spoke to the BBC tonight to deny EU mission to EU representative Pieter Feith's claim that “the transfer of jurisdiction from UNMIK to EULEX has begun.”
"At this point the UN mission has not entered any transition period. We are still on the ground, as we have been since 1999. UNMIK will perform the duties entrusted to it with Resolution 1244, until UN Security Council decided otherwise," Varma specified.
Both Russia and Serbia are opposed to the illegal EU mission (EULEX), which the Union insists on deploying without the UN Security Council or Serbia's approval.
More...
Eingestellt von Medforth um 8:04 PM