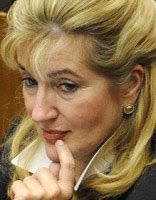 "The Prophet wrote the (marriage contract) with 'Aisha while she was six years old and consummated his marriage with her while she was nine years old and she remained with him for nine years (i.e. till his death)." -- Sahih Bukhari, volume 7, book 62, number 88
More Eurabian madness: an Austrian politician who made an accurate statement about Muhammad's marriage to Aisha, as shown by the hadith above, is facing prosecution for it. When someone can get put on trial for telling the truth, the society has already tipped over into totalitarian thought control, and the totalitarian fascists in question are the European EU elites.
More...
dhimmiwatch
Eingestellt von Medforth um 5:56 AM