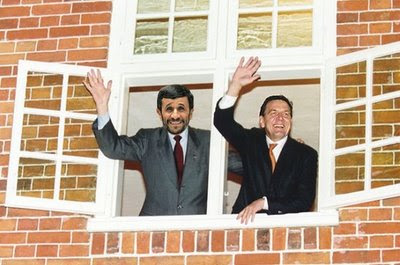 By BENJAMIN WEINTHAL, JPOST CORRESPONDENT IN BERLIN
The German Near and Middle East Association (NUMOV), an NGO whose honorary chairman is former German chancellor Gerhard Schröder, is promoting billions of euros of trade between German companies and Iran.
NUMOV's Web site displays an invitation to next week's fifth annual German-Middle East Round Table: FOCUS IRAN.
In an e-mail to The Jerusalem Post on Tuesday, Wolfram Trost, a spokesman for the Siemens energy giant, confirmed that "Siemens will participate within the framework of the NUMOV energy round table - focus Iran - on May 5 in Berlin."
Ilan Mor, the chargé d'affairs at the Israeli Embassy in Berlin, told the Post, "We are in a sensitive and delicate time period, and promoting economic trade with Iran is false. It sends the message to Teheran that it is business as usual, and these times cannot be viewed as usual. Such conferences undermine the unity of the international community to pressure Iran to stop its activities in the nuclear field.
More...
Eingestellt von Medforth um 8:45 AM