Hiding the truth about Husseini 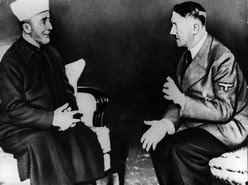 By BENJAMIN WEINTHAL, JPOST CORRESPONDENT IN BERLIN
The publicly funded Multicultural Center's (Werkstatt der Kulturen) decision to remove educational panels of the Grand Mufti of Jerusalem, Hajj Muhammad Amin al-Husseini, who was an ally of Adolf Hitler, from a planned exhibit, sparked outrage on Thursday among a district mayor, the curator of the exhibit, and the Berlin Jewish community.
The curator, Karl Rössler, told The Jerusalem Post that it is a "scandal" that the director of the Werkstatt, Philippa Ebéné, sought to censor the exhibit.
"One must, of course, name that al-Husseini, a SS functionary, participated in the Holocaust," said Rössler. The exhibit covers the "The Third World during the Second World War" and three exhibit panels of 96 are devoted to the mufti's collaboration with the Nazis.
The grand mufti delivered a talk to the imams of the Bosnian SS division in 1944, and was a key Islamic supporter of Nazi Germany's destruction of European Jewry.
Ebéné denied that there was an "agreement " reached with the local German-Muslim community to shut down the exhibit. She termed media queries regarding an agreement as "Eurocentric."
More...
jpost.com
Eingestellt von Medforth um 1:03 PM