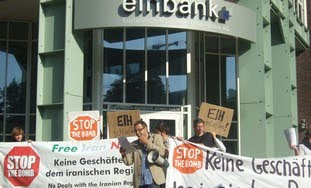 European-based coalition demonstrates in front of the European-Iranian Trade Bank headquarters in Hamburg calling for closure of EIH.
By BENJAMIN WEINTHAL
BERLIN – The European-based Stop the Bomb coalition demonstrated in front of the European-Iranian Trade Bank headquarters in Hamburg on Thursday and called for the closure of EIH because it has been abetting Iran’s nuclear proliferation and missile programs.More than 20 activists protested, and many held banners reading “Stop the EIH terror bank,” “Free Iran now” and “No business with the Iranian regime.”
Stuart Levey, who is spearheading anti-terror measures across the globe for the US Treasury Department, said earlier this month, “As one of Iran’s few remaining access points to the European financial system, EIH has facilitated a tremendous volume of transactions for Iranian banks previously [blacklisted] for proliferation.”Michael Spaney, a spokesman for the Stop the Bomb, told The Jerusalem Post from Hamburg that EIH is “involved in Iran’s nuclear and military programs.”A spokeswoman for EIH declined to comment to the Post on the Stop the Bomb protest.The EIH posted a statement on its website saying “Defamatory accusations by the US Treasury unilaterally putting European- Iranian Trade Bank AG (EIH) on its blacklist of sanctioned Institutions appear to be without cause.These allegations are politically driven and without substance.”German Chancellor Angela Merkel refused a request from US President Barack Obama’s to shut down EIH’s operation in Hamburg, the International Herald Tribune reported last month.The New York-based Leo Baeck Institute, which researches German Jewish history, honored Merkel on Tuesday in Manhattan with the institute’s prize for promoting “German Jewish reconciliation” and support for Israel.Merkel said in her speech, “Our expectations from Iran include that it recognize the security and existence of the State of Israel. Both are never negotiable for Germany.”When asked if she is contradicting her promise to Israel by refusing to close the EIH, a spokesman for the Merkel administration said the chancellor’s office is reviewing the Post query.The London-based Leo Baeck Institute director referred a Post telephone query to the New York office. Calls to the New York branch were not returned because of the Succot holiday.Dr. Wahied Wahdat-Hagh, a German-Iranian expert on Iran and a Fellow at the Brusselsbased European Foundation for Democracy, told the Post on Thursday that a former board member of the EIH, Dr. Pashaee Fam, is currently the director of Bank Sepah and previously worked for Bank Melli. Wahdat- Hagh’s research revealed that Fam was active with EIH until August 2010, and that he previously oversaw financial operations for two Iranian banks – Melli and Mellat – linked to Iran’s sanctioned nuclear activities.Wahdat-Hagh said EIH established branches in Teheran and in Kish, on Iran’s Persian Gulf coast, in May 2008, in which Bank Mellat had a 35 percent stake, and was slapped with sanctions.The UN placed sanctions on Bank Sepah because of its ties to Iran’s nuclear program, and the European Union blacklisted Bank Melli for carrying out financial transactions for Iran’s nuclear and ballistic missile programs.Bank Sepah supports Iran’s military, according to Wahdat-Hagh.He said the German bank regulatory system ignored Fam’s connections to EIH and Melli, as well as his work for another sanctioned bank, Mellat, before his arrival in Hamburg.Meanwhile, the Essen-based international steel and defense company ThyssenKrupp AG announced on Thursday that it will no longer enter into deals with Teheran.“By halting business with Iran we are supporting the sanction policies of the Federal Republic of Germany, the European Union and the US,” Chief Executive Ekkehard Schulz said in a statement on the company’s website. Iran owns 4.5% of ThyssenKrupp.
jpost.com
Eingestellt von Medforth um 8:38 AM