US Treasury bans European-Iranian bank from operating in US 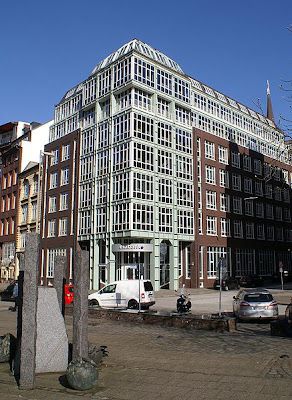 Bank finances ‘nuclear-related’ companies; NGOs slam Merkel for failing to close financial center linked to Iran
By BENJAMIN WEINTHAL
BERLIN – The US Treasury Department last week banned the Hamburg-based European-Iranian Bank (Europaeisch- Iranische Handelsbank) from operating in the US because it finances companies that help Iran build weapons of mass destruction.NGOs in Germany and the US slammed German Chancellor Angela Merkel’s administration for refusing to shut down a leading finance center for nuclear proliferation and Teheran’s missile program.“EIH has acted as a key financial lifeline for Iran. As one of Iran’s few remaining access points to the European financial system, EIH has facilitated a tremendous volume of transactions for Iranian banks previously designated for proliferation,” Stuart Levey, US under secretary for terrorism and financial intelligence, said in a Treasury Department statement.“As international sanctions tighten, Iran will find it increasingly difficult to find banks like EIH that will cooperate with it. Treasury will continue to target any bank, wherever located, that supports Iran’s nuclear or missile programs,” said Levey, who oversees American efforts to stop the financing of terrorism across the globe.The US Treasury proffered a list of EIH’s proliferation activities. “In 2009, EIH and Bank Mellat facilitated nearly $350,000 of business between a weapons exporter and a subsidiary of WMD proliferator Iran Electronics Industries (IEI),” it said.“In a six-month period beginning in late 2007, EIH and the Export Development Bank of Iran enabled Iran’s missile programs to purchase more than $3 million of material; also in 2007, almost $1m. in business involving an Iranian WMD proliferator was facilitated by EIH and Bank Mellat.”Mark Dubowitz, executive director of the Washington-based Foundation for Defense of Democracies and an expert on sanctions targeting Iran’s energy infrastructure, told The Jerusalem Post on Sunday, “Germany, one of Iran’s most important trade partners, has recently developed a fragile political consensus in favor of tougher sanctions. German businessmen, however, remain wary of losing lucrative deals and are testing the resolve of European and American leaders.”Michael Spaney, a spokesman for the German chapter of the Stop the Bomb NGO, said in a statement last week, “We call on the German chancellor to immediately ban EIH. Germany must at long last become active in the area of Iran sanctions. It is up until now about empty phrases. The German government contends it want to prevent a nuclear-armed Iran while continued intensive trade is carried out with Iran.”A Foreign Ministry spokesman in Berlin said the US informed Germany in advance of its decision to ban the EIH from American markets. The spokesman said a German bank regulatory agency is strictly monitoring the EIH.The veteran New York Times journalist John Vinocur wrote in his August column that US President Barack Obama appealed to Merkel to shut down the EIH, but he was snubbed by the chancellor.The EIH said in a statement that the EIH “at all times strictly fulfills and observes applicable legal regulations and all sanctions and export guidelines.”Germany is Europe’s largest Iranian trade partner, with annual trade volume around €4 billion, and the third largest global business partner of Iran after China and the United Arab Emirates.Despite the international community’s efforts to isolate Iran, many German companies, particularly engineering firms have defied sanctions. German exports to Iran increased by 14 percent during the first half of 2010 compared to the same period a year earlier.Meanwhile, the Linde Group, a Munich-based industrial engineering specializing in gas technology, confirmed in an e-mail to the Post on Friday that the company plans to walk away from its Iran business. Uwe Wolfinger, a Linde spokesman, wrote that the company had decided “to stop our activities in Iran and with Iran completely.”According to Wolfinger, Linde conducted €39m. worth of trade with Iran in 2009.While Linde has pulled the plug on new deals with Iran, ThyssenKrupp AG, an engineering and military conglomerate based in Essen, plans to continue trading with the Islamic Republic.Alexander Wilke, a spokesman for ThyssenKrupp, wrote by e-mail to the Post on Friday that the company will “adhere to the national and international export and embargo regulations” but declined to answer questions about whether ThyssenKrupp would stop doing business with Iran.He said that “4.5% of the shares “of ThyssenKrupp are owned by the Iranians and that its business with Iran amounted to roughly “€40m. in business cycle 2008/2009.”Dubowitz, from the Foundation for Defense of Democracies, told the Post, “The Linde Group’s decision to freeze any future deals with the Iranian regime is a positive signal that some major German companies – Allianz, Munich Re, Hannover Re, Siemens, and now Linde are examples – have decided that their European and US business interests are more important than their Iranian ties.”He added that “Any sign, however, that Germany’s political leaders are wavering on sanctions – and their refusal to shut down EIH’s and ThyssenKrupp’s activities is a worrying development – could collapse the sanctions regime before it has time to work. This could force the US and Israel to consider less peaceful alternatives.”German supporters of Israel have criticized ThyssenKrupp for failing to uphold Germany’s “special relationship” obligations to the security of the Jewish state.Thyssen and Krupp, which merged in 2000, were major users of slave labor during World War II and deeply involved in advancing the aims of the Holocaust.
jpost.com
Eingestellt von Medforth um 12:14 PM