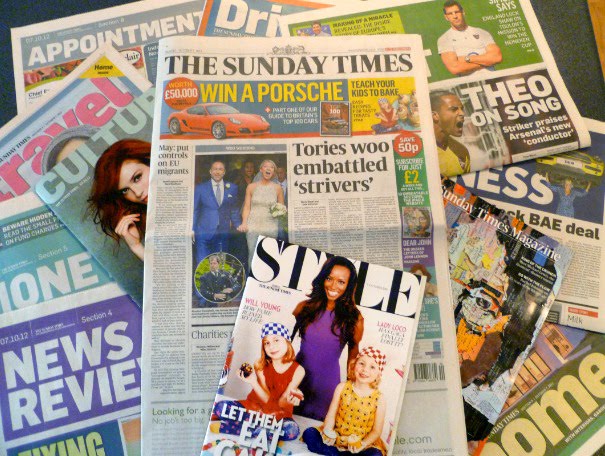 A layout of all of the supplements of a Sunday Times issue. Photo: Wikipedia.
In my 2010 report published by the Jerusalem Center for Public Affairs about antisemitic cartoons, I noted that political cartoons often have more of an immediate impact in reinforcing negative stereotypes than a lengthy essay. They express ideas which are easy to understand, and thus represent an efficient way to transmit hate and prejudices, including antisemitism. While the largest output of antisemitic cartoons nowadays comes from the Arab and Muslim world, some “respectable” European papers have published graphic depictions of Jews evoking classic Judeophobic stereotypes. Some of the core motifs of antisemitic cartoons are Jews as absolute evil; imagery equating Israel with Nazi Germany; Jewish conspiracies; Zionists controlling the world; and variations of the blood libel. While mainstream Western papers avoid explicitly promoting the blood libel, variations of this theme – suggesting in cartoon and in prose that bloodthirsty Israeli Jews intentionally kill innocently Palestinians (often children) – have been published at popular sites. For instance, one of the most popular news sites in the Anglo world, The Huffington Post, posted a cartoon in 2012 by notorious antisemitic cartoonist, Carlos Latuff, which clearly conveyed the idea that the Israeli Prime Minister was murdering Palestinian babies to gain votes in the upcoming election, suggesting that baby killing was supported by the Israeli public. A similar motif of infanticide appeared in a 2003 cartoon by Dave Brown in the progressive British daily The Independent. The cartoon shows Sharon eating the head of a Palestinian baby and saying, “What’s wrong? Have you never seen a politician kissing a baby?” It won Britain’s 2003 Political Cartoon of the Year Award. The following cartoon was published at The Sunday Times (the largest-selling ‘serious’ British national Sunday newspaper) yesterday, Jan. 27, International Holocaust Memorial Day. In case you didn’t notice, the text reads ‘Will Cementing Peace Continue?’, an apparent allusion to Israeli construction across the green line. However, the Sunday Times cartoonist decided to depict such building as not only injurious to peace, but (as the bloody, mangled bodies being buried over with cement, laid by the bloody trowel of a sinister Israeli Prime Minister) as a sadistic act of violence against innocents in order to gain votes in the Israeli election. In light of the Sunday Times’ decision to publish a cartoon on Holocaust Memorial Day depicting a blood-lusting Jewish leader, as well as recent comments by British MP David Ward suggesting that, on Holocaust Memorial Day, Jews should learn to stop “inflicting atrocities on Palestinians”, as well as other routine debasements of Holocaust memory, here’s a simple, if counter-intuitive request to those who believe that the Holocaust means anything at all: Spare us your Holocaust pieties, your monuments, your memorials, museums and days of remembrance, and consider that, instead of honoring Jews murdered over 65 years ago, you may want to begin, instead, to honor Jews who are still among us. There are many ways to show reverence for a tiny minority which has somehow survived despite the best efforts, past and present, of practitioners of homicidal antisemitism. However, the especially morally righteous among you may wish to gain a basic understanding of the precise manner in which Jews have been caricatured, vilified, demonized and dehumanized prior to pogroms, massacres and genocides, studiously avoid advancing narratives or creating graphic depictions which evoke such antisemitic imagery, and righteously condemn those who do so. You can not undo the horrors inflicted upon six million souls, but you can live your life with a steely determination to never again allow lethal, racist narratives about living Jews to go unchallenged, and to assiduously fight efforts to reintroduce such toxic calumnies into the “respectable” public discourse.
algemeiner
Eingestellt von Medforth um 2:24 AM