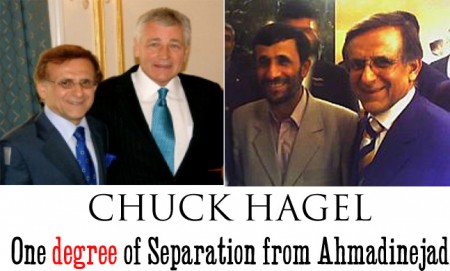 By Daniel Greenfield
The major organizations of the liberal Jewish community have now come out and expressed concern about Hagel. They did so belatedly, instead of speaking out before Schumer and Levin became Hagel’s biggest cheerleaders, perhaps as part of a deliberate strategy to appease their base by speaking out at a time when it was too late to have any effect, but they did it.
The leftist Jewish groups, e.g. J Street, Jewish Voice for Peace, Peace Now, Hamas, etc have always been major Hagel backers. And the ADL, AJC and B’nai B’rith took far too long to speak out. But better late than never. And by speaking out they are providing less cover to Schumer and Levin to do their dastardly deed.


B’nai B’rith International remains concerned with many aspects of former Nebraska Sen. Chuck Hagel’s responses to questions during his confirmation hearing for the position of secretary of defense. Since then, more questions have been raised about Hagel’s views on a number of important issues.
During the U.S. Senate Armed Services Committee hearing Hagel did not assuage our reservations on how he would approach such topics as terrorism, Iran and Israel. We urge all Senators, as they prepare to vote, to carefully review Hagel’s record and hearing responses to determine his qualifications for the post.
We are concerned that Hagel, unlike the vast majority of his Senate colleagues, underestimates the threat of the Iran-backed terrorist group Hezbollah.
Hagel was in the minority when 88 of his then-Senate colleagues called on the European Union to designate Hezbollah as a terrorist organization. Hezbollah has been a global terror group since it was founded some 30 years ago. Its decades of terror include the 1983 bombing of the U.S. Marine barracks in Beirut, Lebanon that killed 241 Marines, soldiers and sailors, and the July 2012 attack on Israeli tourists in Burgas, Bulgaria that killed five Israelis, their Bulgarian bus driver and wounded 30 others. After a six month investigation, the Bulgarian government issued a report unequivocally blaming Hezbollah for that attack.
We are troubled that Hagel, during his confirmation hearings, undermined the importance of preventing Iran from acquiring nuclear weapons. He appeared to endorse a policy of containment of a nuclear Iran before being advised that containment was not administration policy.
In recent days, Hagel has disavowed, or said he didn’t remember, making certain past comments about Israel. At a 2007 speech he is said to have referred to the U.S. State Department as “an adjunct of the Israeli foreign minister’s office.”
Our hesitation on his nomination is based on our uneasiness with such updates to his record.
B’nai B’rith International expresses the expectation that members of the Senate will give his record a thorough review prior to the vote.

And here are the AJC and ADL statements.


February 15, 2013 – New York – AJC called today for further review of Senator Chuck Hagel’s views on vitally important national security and foreign policy issues, as the Senate stalled in its confirmation of the Secretary of Defense nominee.
A day after a procedural bid to end debate and move toward confirmation of the former Nebraska senator failed on a mostly party-line vote, AJC Executive Director David Harris said that recent reports of the nominee’s views on Middle East policy and the U.S. role merit more thorough examination.
The full AJC Harris statement follows:
“Chuck Hagel has served this country, and his state, with distinction, as we have had the privilege to tell him in person. But in light of his complex record in the Senate and controversial statements he has made since his public service on strategic and political affairs – notably grappling with the range of pressing Middle East issues – AJC believes that further Senate deliberation is called for before any final vote is taken.
“Moreover, reports are now circulating that the nominee purportedly spoke derisively in recent years of U.S. policy-making regarding Israel and the vital U.S.-Israel relationship. Thus, we feel it especially important that Senator Hagel be given a full opportunity to clear the air, so that the Senate can have a more thorough picture of the nominee’s views.
“In calling for more Senate discussion on the nomination, let me stress one key point. AJC is a strictly non-partisan organization. We speak up now only out of concern for policies we deem vital to our nation and central to our organizational mission.”

The ADL initially issued a weasely pro-Hagel statement, while asking him to explain the Jewish Lobby crack, but Foxman has since come out and said that Hagel’s nomination needs a longer look.
frontpagemag
Eingestellt von Medforth um 6:15 PM