By Frimet and Arnold Roth 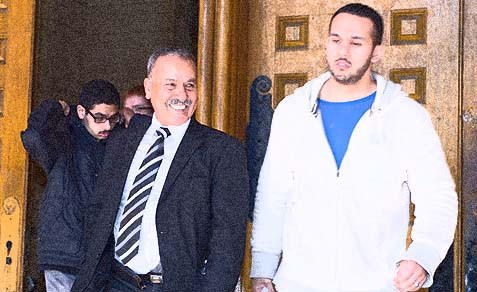 Family members of Raed Jaser leave court in Toronto on Tuesday, April 23, 2013. Jaser is accused of plotting to derail a train in Canada in the service of al-Qaida in Iran.
Photo Credit: Frank Gunn

Here’s a follow up to to the discovery of a terror cell in Canada. Questions are now being asked there that highlight a series of governmental decisions about one (at least) of the two men accused of plotting to carry out a terrorist attack on an interurban train. They’re questions that ought to get some wider airing and they come from Canada’s minister of citizenship and immigration, Jason Kenney.

The questions are about Raed Jaser, 35, accused, along with Chiheb Esseghaier, 30, of planning to derail a Via Rail passenger train in what the Canadian authorities are calling an “al Qaeda supported” attack. Terrorism-related charges [detailed here] have been brought against the two.

From a CBC report, the government minister framed his concerns this way.

* Mohamed Jaser, with his wife, his son Jaser and two other children, travelled from Germany where they had been living, equipped with fake French passports, arriving in Canada on March 28, 1993. They applied immediately for asylum as refugees. Jaser was a boy of 10. He had been born in the United Arab Emirates, though he did not hold UAE citizenship. * The family’s request for refugee status was denied. They appealed, and must have succeeded because the report says they eventually became Canadian citizens.

* Jaser, however, did not – evidently because of a proclivity for engaging in crime. He had acquired five separate fraud-related criminal convictions and was also convicted of making death threats by the time the citizenship application was heard. These offences rendered him ineligible for citizenship.

* In 2004, the Canadian government served a deportation order on him. In court – despite the government’s claims that he should remain in detention – Jaser’s lawyer successfully argued that Jaser could not be deported because, as a Palestinian, he was stateless (though he was born in the United Arab Emirites – see below).

* Some time after that, Jaser received a pardon – why is not clear – and granted permanent residency status in Canada.

Kenney says, as minister of citizenship and immigration, that the pardon and permanent residency given as gifts to the accused terrorist happened because of “old policies.” Canada had recently legislated the Faster Removal of Foreign Criminals Act, a law designed to make it easier for Canada to expel foreigners who have faced six months or more in jail for a crime committed in Canada.

Some time after Raed Jaser got permanent residence (according to Canada’s Global News), his own father


became worried enough about his son’s religious views to ask others in the community for assistance that apparently never came through, and another two before a Toronto imam approached police through a lawyer, concerned about Jaser’s influence on youth. By the summer of 2012, he was under RCMP surveillance as part of an investigation that would ultimately see him and 30-year-old Chiheb Esseghaier arrested, accused of terrorist conspiracy and plotting to attack a passenger train… [more].


The parents’ story [source] keeps coming back to their Palestinianism:

Raed Jaser’s father, Mohammed Jaser, says he was born in Jaffa; moved with his parents to Egyptian-occupied Gaza Strip as a child. Egyptian authorities refused to provide citizenship. The mother says she is a Palestinian, though born in Saudi Arabia.

The two married when she was 16, and lived in Hashemite Kingdom of Jordan. She attended secretarial and business administration school. Mohammed, the father, was granted legal residence in Jordan.

Raed’s younger brothers were born in Jordan. In 1966, the Jasers all moved to United Arab Emirates. Raed was born there.

Mohammed Jaser worked there in a garage, then as a school teacher, then to an advertising and publishing firm, then to Al Syasa, a political newspaper. he describes being terrorized by UAE authorities. “We lived in fear. Palestinians in the Gulf became the target of abuse, random arrests, torture and beatings… We lived as outsiders, in fear of growing and hardening anti-immigrant and anti-refugee sentiments. Our lives were threatened and we were harassed.”

After 24 years in the UAE, the family moved to Germany in January 1991. “The Jaser children were denied asylum.” They again “lived as outsiders, in fear of growing and hardening anti-immigrant and anti-refugee sentiments. Our lives were threatened and we were harassed.”

Mohammed Jaser says he chose to immigrate to Canada because he had two brothers there, one a Canadian citizen, the other a refugee. Other siblings still live in the UAE. (But no suggestions about why this was done via forged French travel documents).

The family’s application to become Canadians was rejected at first because the authorities “had concerns about the family’s credibility. However, as stateless Palestinians, they could not be removed from Canada since there was nowhere to send them.”

The Canadian authorities are now going to have to figure out how to fit the family saga of harassment (by Egypt, Germany, UAE at least) with a major terrorist plot. Also: how to explain to Canadian citizens that criminal offenders who claim Palestinianism and statelessness cannot be expelled even when the law requires it because there is nowhere to send them. It’s a conundrum they might care to take up with the Palestinian Authority who first declared themselves to be a state twenty-five years ago on November 15, 1988.