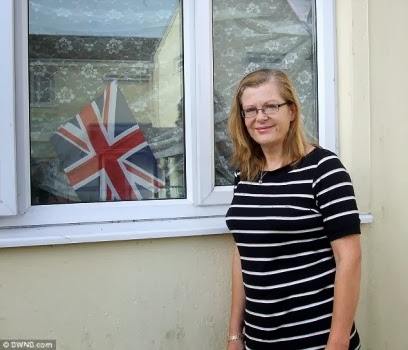 No good deed goes unpunished in Eurabia and Londonistan. The media used Ingrid Loyau-Kennett’s courage to put a positive spin on the brutal Muslim murder of Lee Rigby. But the police who stayed away from the scene while the butchers ranted and raved from the Koran were quick to go after her.


Ingrid Loyau-Kennett, 48, stepped in to confront the alleged killers moments after Drummer Rigby was attacked in May. But now she says she has been threatened with arrest herself after thugs pelted her house with eggs and stones.
She says she dialled 999 and went outside to “calmly” remonstrate with the gang but when police arrived she claims they “manhandled” her and threatened to arrest her for a breach of the peace — and that instead of dealing with the youths responsible, a policeman grabbed her arm and twisted it.
The teacher and former Girl Guides leader said: “I’ve had trouble with these youths from the moment I moved in here five years ago. Being on the television just made things worse. I became more of a target. I’ve never confronted them before but I’d had enough and decided to be brave.
…
“I called the police as soon as the incident happened. They arrived after 20 minutes which was useless.
“The police were saying that I should stop ringing them and that I had no proof. One of the policemen grabbed my arm really tight and twisted it. He told me that if I didn’t calm down I would be arrested.
Ms Loyau-Kennett has since written to the Minister for Policing, Damian Green, to complain about the behaviour of the officers. She says she was so traumatised that she fainted and an ambulance had to be called.
Police confirmed they were called out and a woman was given advice about her behaviour but denied she was threatened with arrest.

Welcome to modern policing. The “groups” responsible for the violence are ignored. Citizens who complain however are given the full treatment.
Let’s just recall the spectacular performance of the London police while a British soldier was dying in the street. It took them 20 minutes to arrive at the scene while brave civilians like Loyau-Kennett confronted the Muslim murderers.
But afterward they were quick to crack down on thought-criminals who offended Muslims. Like this 85-year-old menace to society.


“An 85-year-old woman has this afternoon been arrested after abuse was hurled at Muslims outside Gillingham Mosque. The pensioner was handcuffed and taken away in a van by officers attending the Canterbury Street mosque for Friday prayers. As worshippers gathered outside the venue, a woman at a nearby bus stop shouted: “go back to your own country”.

Welcome to Londonistan where the cops are quick to crack down on elderly women who offend Muslims, while giving the Sons of Allah free reign for their Jihads.
frontpagemag
Eingestellt von Medforth um 8:00 AM