Following the murderous attack on a Danish synagogue, Norwegian Muslims organized a peace-ring around the Oslo synagogue.

Hundreds of Norwegian Muslims are expected to form a human ring around Oslo's synagogue on Saturday, showing solidarity with the city's Jewish community a week after a gunman attacked a synagogue in neighboring Denmark.

Organizers of the event, who say Islam seeks to protect all people, regardless of their religion, expect more than 2,000 people to join the symbolic "ring of peace."

One of the organizers of this initiative is Hilal Kømurcu.
As antisemitism watchdog group SAW points out, Kømurcu has previously expressed her hate of Israel and any Jew who supports it, claiming that Israel supports the PKK terrorist group.
A few examples, "The terrorists of Isra-hell and the PKK are working together", "All the Kurds who support PKK support Israel, there are no exceptions". 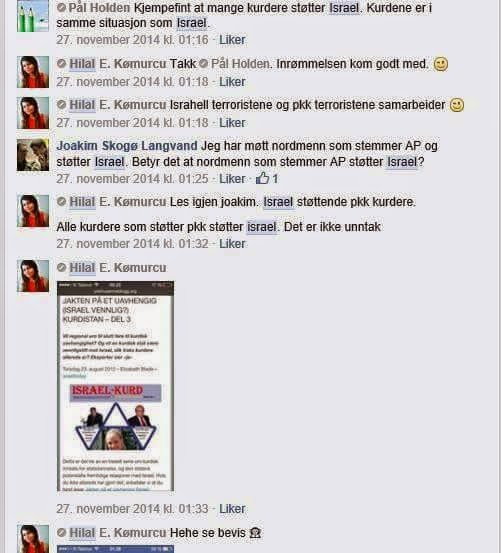 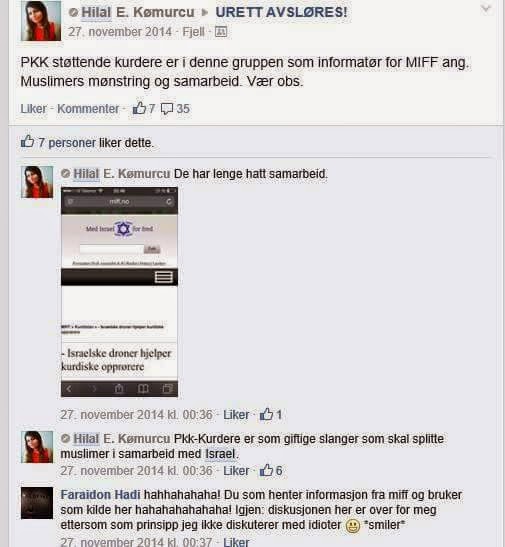 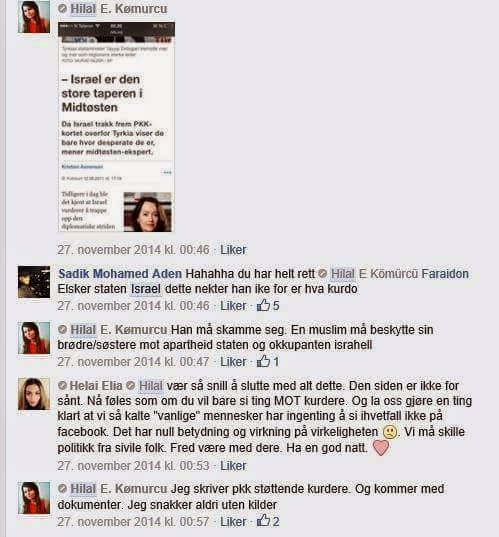 "I wonder what those ISIL jerks are doing. They should have invaded ISRael"

(note that 'ISIL' is written in lower-case, while ISRael, the terrorists, are in uppsercase).

Does Israel support the PKK?  Hardly.  Historically, the PKK partnered with Syria and the Palestinians, while Israel partnered with Turkey.  That reality is changing, and Israel, like every other nation in the Middle East, has to feel its way between the different warring sides.
Personally, I hope Israel is not supporting terrorists in any way, shape or form.  We have suffered enough from them and from their supporters.  People like Kømurcu - who hates the PKK, but doesn't really care if Islamic State would attack the 'right' people (ie, the Jews).
Kømurcu doesn't really care about Israeli 'policies'.  She hates Israel and would like to see it gone.   A funny position for a person who now claims to care about 'protecting' Jews from Muslim terrorism.

Waqas Sarwar, one of the organizers, says that Kømurcu is not involved at all and that she's misrepresenting herself.  He rejects her posts and says that he believes in the rights of both Muslims and Jews to live in Israel.

The fact is that the organizers are active in the pro-Palestinian movement.

Hajrah Arshad wrote an op-ed calling for Norway to boycott Israel.  "I don't want any economic or friendly relations.  We don't need to be friends with a country that doesn't care about the lives of small children."

On his Facebook page, Waqas Sarwar writes both against Israel and against MIFF, the Norwegian pro-Israel activist organization.