Belgium: Belgocontrol employee wants a pogrom (in response to Israeli request for US aid)

Last year we reported the story of a Belgocontrol employee Johan Vercarre who posted insults against Jews ('dirty Jews') on the Facebook site of Knack, a supposedly respectable Belgian magazine.  The insults remained online for close to a month, until the Belgocontrol chief was contacted directly.

But the thing about antisemites is that trivial insults can easily turn to death threats.

And so Johan Vercarre is at it again.  This time, in response to an article about Israel requesting more US aid, his response is: Organize a little pogrom, then? 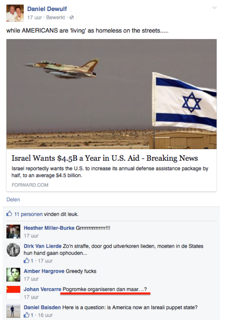 My previous post was about a Belgian Muslim who posted that he wants to kill all Israeli Jews.  This made headlines and he might be dismissed from his job.

Once again, it is important to note: You do not need to be Muslim to want to kill Jews, and you don't need to be a Muslim in order to 'confuse' between Jews and Israelis.  Antisemitism is equal-opportunity and accepts people of all faiths, races, backgrounds, genders, political and sexual orientations.

Maybe it's time Belgocontrol do something about their employee?
antisemitism-europe
Eingestellt von Medforth um 5:58 AM

It was again an overdrive reaction of the man Vercarre who in fact is not asking for a pogrom, but wanted to warn that the result of attacking innocent Palestinians could lead to a such behaviour as a 'pogrom'....He was making a reaction on my post cc. the aid of the US to Israel.(3th law of Newton applying : action=reaction) But I recognise he was reacting IN OVERDRIVE.....As we say "damned".....but only wanting to express our anger...