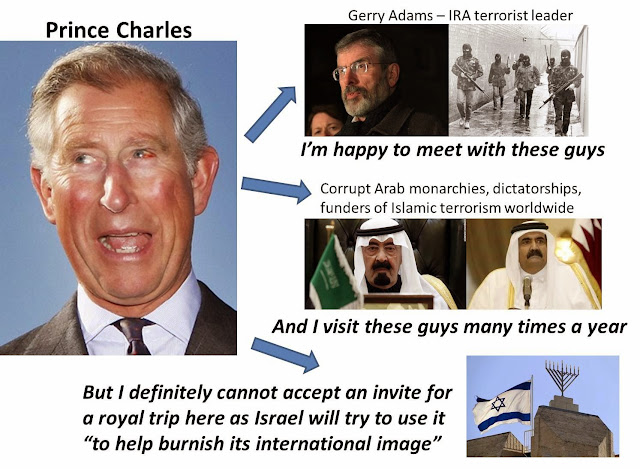 Prince Charles has upset some people today by meeting IRA leader Gerry Adams, although nobody ever bats an eyelid when he - and the Queen - visit terrorist-sponsoring corrupt Arab regimes, which they do all the time.

Charles did make one visit to Israel in 1995 to 'represent the Queen' at the funeral of Yitzhak Rabin. It is the ONLY 'official' visit ever made by a member of the British Royal Family (his father Prince Philip visited his mother's grave in Jerusalem in 1994 but the Royal Family and the British Government made clear that this was only in a 'private capacity').  The anti-semitic Arab arse-licking goons who have dominated the British Foreign Office for years have never allowed the Queen to visit Israel in case it 'upsets our Arab friends'. But Prince Charles's aides went further than that in 2007 when they ruled out any official visit declaring:


"Acceptance would make it hard to avoid the many ways in which Israel would want HRH [Prince Charles] to help burnish its international image."

If David Cameron is even half the 'friend' of Israel that he and some of his naive Jewish supporters think then he should demand that the Queen finally accepts Israel's long-standing invitation to visit their country.
edgar1981
Eingestellt von Medforth um 12:41 PM