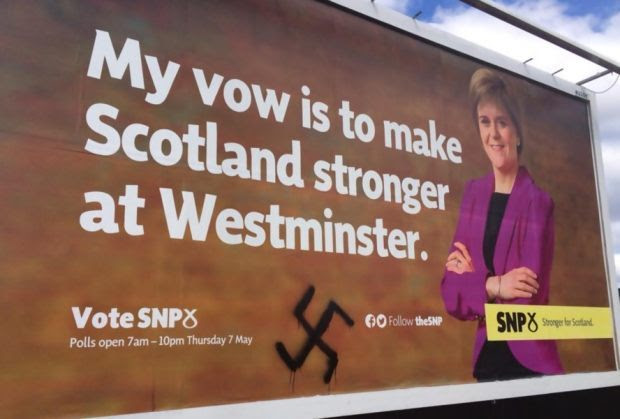 A prominent German journalist living in the Scottish Highlands has provoked the wrath of his adopted homeland by describing Scottish National Party (SNP) ideology as “modern national socialism light.” Reiner Luyken, who has lived in the Highland village of Achiltibuie for 36 years and writes for Die Zeit, a respected German newspaper, has penned a number of articles in which he accuses the Scottish of racism. One pieces about life in Achiltibuie was entitled “No Tea for the English”; another: “You Are Not Welcome, Foreigner”.
In his most recent, published a day after the general election and titled “Scottish Liberalism is Dead,” he wrote: “A majority of [Scottish voters] flung themselves into the arms of a party the ideology of which is modern national socialism light.
“Populist, egalitarian, anti-elitist and glorifying the moral superiority of one’s own nation.
“Using their propaganda the party split the country into patriots and unreliable non-believers.
“On one side the Yessers, faithful Scots who voted Yes in September, and on the other side unionists and quislings.”
Mr Luyken then explained the term “quisling” for his readers as “a derogative term for collaborators in Norway during the Nazi occupation in WW2.”
A spokeswoman for the SNP said: “These claims are obviously ridiculous and offensive to the 1.45 million people who voted SNP less than a fortnight ago.”
And Local SNP MSP Rob Gibson dismissed Mr Luyken’s observation, saying: “The idea that Scotland is compared to the Nazis is just ludicrous.”
But Mr Luyken has pointed out that he was very careful not to call the SNP “Nazis”.
“I never said Nazi, because Nazi is connected with something that turned into a completely different kind of historic phenomenon,” he said. “I say national socialism, and in the lower case, national socialism light, a modern form of national socialism light.”
He added  “If I tell my 93-year-old father some of the stuff the SNP come out with, he finds aspect of it very familiar. He remembers the time very well. It’s the moral superiority, and the whole ideology of it. To have left-leaning ideology within a national context.”
Regarding his critics he said: “They can say whatever they like. It just shows how little they know about the foundations of national socialism. People know very little about German history. They think the national socialism was about concentration camps and killing the Jews but they don’t know the ideological background to it.”
Last October Mr Luyken made headlines when he claimed that locals in Achiltibuie had once put on Hitler moustaches and marched past his table at the local pub. Of that incident, he wrote: “When my wife and I went for a bite at a local pub with another German-British couple, two guys stuck little Hitler moustaches to their top lips, and marched provocatively past our table.”
Fisherman Peter Drake, 52, told the Mirror: “He writes things that are particularly offensive to people in this community, and when they complain about it he says it’s racist.”
But Mr Luyken hit back, saying: “The whole of Scotland is racist. It’s as racist as any country in Europe – in fact it’s a lot worse. Strangers are welcome here so long as they toe the line.”
Mr Luyken is not the only person to have spotted parallels between the SNP and Germany’s Nationalsozialistische Deutsche Arbeiterpartei. Last July the Labour Party’s Westminster candidate for Angus stepped down after tweeting a picture of the Hitler Youth.
According to the Arbroath Herald, Kathy Wiles originally posted a photo of a pro-independence rally outside BBC Scotland ahead of the Scottish Independence referendum. When other Twitter users likened the image to that of the Hitler Youth, Ms Wiles responded with a picture of children congregating around a swastika.
She later apologised, tweeting “I tweeted a picture on Sunday which has caused offence for which I apologise unequivocally.
“My intention was to make a point about the dangers of using young children in political campaigns, not to make any inference about those in the photo.”
A Labour spokesman said: “We believe that Kathy Wiles has taken the right decision to withdraw in Angus.”
breitbart
Eingestellt von Medforth um 8:42 AM