Germany: Nakba Day speaker says "Anne Frank would have been today on our side" 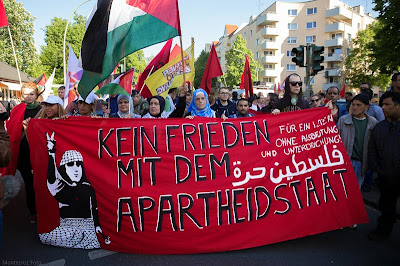 European countries are very proud of the fact that their school curriculum includes the Holocaust, but look at the results: Denying antisemitism today, using Anne Frank in order to deny Jews the right to self-determination, and comparing Jews to Nazis.

From a speech at the Nakba Day rally in Berlin, via emo.youth@tumblr.

Now I will give an example on how German circumstances are. We just made a theater play about Anne Frank. The father of Anne Frank said he wants the story of Anne Frank to be a universal story. Anne Frank counts for everybody. A group of Muslims from Kosovo, Palestine, Afghanistan have met and looked into the story of Anne Frank and have gathered courage and inspiration from this, because they say we know what it means to be a minority in today’s Germany just like the Jews were back then. Anne Frank belongs to us. We made a play about it. And you know what they wrote? “Anti-semitic! Muslims are not able to refer to Anne Frank.” We say Anne Frank would have been on the streets today on our side against racism and Israel’s politics.