Obama: If Israel Doesn’t Commit Suicide, I Can’t Protect It 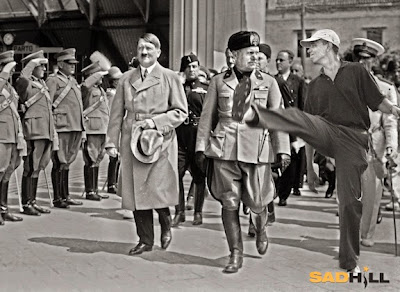 Obama is once again using Jeffrey Goldberg to sell his Iran nuclear sellout to liberal Jews. It’s hard to tell whether Obama or Goldberg is slimier, but beneath all the high-minded rhetoric is something very ugly.
Consider this statement from Obama…


“And when I was in Jerusalem and I spoke, the biggest applause that I got was when I spoke about those kids I had visited in Ramallah, and I said to a Israeli audience that it is profoundly Jewish, it is profoundly consistent with Israel’s traditions to care about them. And they agreed. So if that’s not translated into policy—if we’re not willing to take risks on behalf of those values—then those principles become empty words, and in fact, in my mind, it makes it more difficult for us to continue to promote those values when it comes to protecting Israel internationally.”

Now trim away all the left-speak about “values” and the other euphemisms like “risks”, and what you’re left with is Obama stating that if Israel doesn’t surrender to terrorists, he will openly turn on it.
Obama is couching this in terms of values to soften the wording. Israel has in fact taken countless “risks”. It still continues taking “risks”. When its cities are shelled and its children are murdered, it’s because of the “risks” in took in the peace process.
Israel took “risks” by releasing terrorists when Obama demanded it. He kicked it in the teeth anyway.
And that’s the real story. No matter how many sacrifices Israel makes, it’s still always at fault. We hear from Obama how much he cares about those Muslim kids in Ramallah. Nothing about the Jewish kids who have been murdered.
Here’s Goldberg’s spin on it…

Strip away the left-speak and it translates to, “He hits me because he loves me.”
How appropriate. That’s the real relationship between Jews and the left. The technical term is Stockholm Syndrome.
In the past, I summed up this exchange as, “I will only love you if you kill yourself”


To win the love of the left, each country only needs to embrace their ideals which declare that the country and its people are worthless, unless they admit their own worthlessness by agreeing to a suicide pact under the guidance of the left. For America, Britain, Israel, Canada, France, and every civilized country have no value to them, unless they agree to the left’s ideals. Ideals which declare all these countries evil. An evil that can only be purged when they agree to destroy themselves.
It is the same thing as a man saying to a woman, “I will only love you, if you kill yourself.” His statement contains the word “love” in it, but it is premised on her agreeing to cease to exist. Which means that he hates her existence, and loves the idea of her non-existence.
So too the left love their countries.

This is how Obama loves Israel. He loves the idea of Israel’s ceasing to exist in line with leftist values. He loves Israel to death.
frontpagemag
Eingestellt von Medforth um 1:36 PM