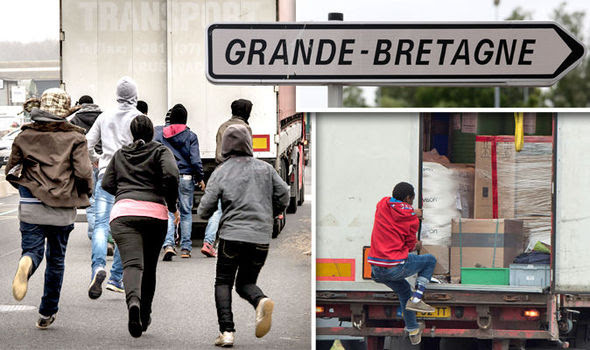 British lorry drivers are avoiding Calais because of iron-bar wielding illegal immigrants trying to force their way on to their vehicles. Instead they are driving almost 100 extra miles into Holland to use other ports because they are “terrified for their lives” driving into Calais. Michael Pearson, of Maru International in West Yorkshire, said the current problem was the worst he had seen in 40 years. The Road Haulage Association said drivers have been left feeling vulnerable and called on security to be improved immediately at European ports. The Home Office said more than 40,000 attempts by illegal immigrants to get to the UK had been thwarted in 2014 but drivers say the situation is now far worse than last year. The managing director of Maru International, Vaughan Woolfitt, which is based in Dewsbury, said the firm was now routing lorries through Zeebrugge and Hull to avoid incidents at French ports. Trucker Michael Pearson said: “A group of maybe 20 or 30 people, crowbar in hand, broke the padlock off the truck in front, broke the [security] seal and opened the doors. “If I think about it now, I’m in fear of my life and I’m not by myself on this, several of my colleagues also spoke about that. “Their [illegal immigrants] attitude, their whole goal is just to get to the UK irrespective of what damage, or damage to persons, vehicles, property they cause, it doesn’t matter. “They were raising fists, there was a bloke with an iron bar because I was blowing the horn to alert the driver in front that they were getting into his trailer. That’s the bit they don’t like, blowing your horn. “That threat was directed at me personally. I was terrified because I’m on my own and if you get out - you can’t get out - because your life’s in danger.“It’s only a matter of time before somebody is seriously injured, killed or windows are smashed and people are dragged out of their trucks. It’s an unbelievable experience to go through.” Mr Woolfitt said: “It is extremely intimidating and I think the French and UK authorities should be working really hard to make sure that trade is unhindered and our drivers shouldn’t have to go to work fearing for their safety.” The Road Haulage Association, which represents haulage firms in the UK, said northern European port security needed improving, particularly fencing on approach roads to ports and the EU borders in Greece and Italy needed to be secure. The Home Office said: “We continue to strengthen the security of our borders to stop those who have no right to enter the UK. “Using some of the best technology in the world, together Border Force and the French authorities prevented more than 39,000 attempts to cross the Channel illegally in 2014/15 —more than double the number prevented the previous year.”
express
Eingestellt von Medforth um 3:26 AM