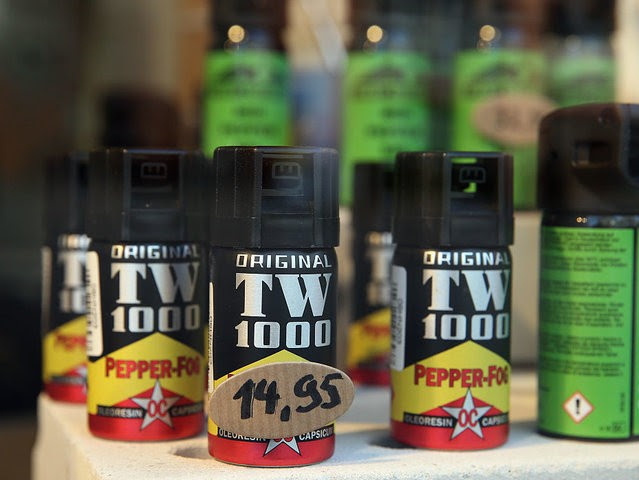 One of Germany’s largest drug stores is now carrying pepper spray after the company claimed there had been a large demand from the public for the product. German pharmacy DW is one of the largest in the country and their shops can be found in every German city. The drug store carries over the counter drugs, basic beauty supplies and toiletries, but now it has been revealed that they are stocking a new line — pepper spray.
Next to the toothpaste and deodorant the pepper spray is advertised as “animal repellent” and while other drug stores are complaining, the German police are warning against the public use of the product reports Tagesspeigel.
According to the paper the pepper spray has been available online for months and has been in physical locations since the end of June. The cans of the substance, which is often used by police and by civilians for self-defence costs just over 5 euros for a can. CEO of DW Sebastian Bayer told German press that the product had been requested by many customers and that was the reason it appeared on the shelves.
“There was an increase in requests from customers who wanted to purchase the spray at a convenient location,” Bayer said and added, “We checked it out and decided to make the animal deterrent spray available in our stores.” According to Bayer there have been nothing but positive comments from customers for the chains decisions to stock the item.
In order to own pepper spray for the means of self defence in Germany a licence is required. Many of these licenses have been sought by everyday Germans following the massive sexual assaults that took place on New Year’s Eve in Cologne which also grant the licensee the ability to own certain firearms. The company selling the pepper spray announces on the label that the pepper spray is only meant to be used on animals, effectively circumventing the need for a license.
Drug store Rossmann, the main competitor to DW, reacted with horror to the news saying, “A pepper spray is basically a human repellent spray.” German police were also against the public buying the product saying that the pepper spray could lead the individual who owns it to put themselves in more danger because they have the confidence of being able to defend their person rather than deescalating the situation.
Leader of the anti-mass migration Alternative for Germany party Frauke Petry came out over the weekend to call on Germans to arm themselves in self defence against possible attackers in reaction to the recent terror attacks in Germany. “Many people are increasingly feeling unsafe.
“Every law-abiding citizen should be in a position to defend themselves, their family and their friends. We all know how long it takes until the police can get to the scene, especially in sparsely populated places,” Petry said.
breitbart
Eingestellt von Medforth um 8:51 AM