Islam in UK: Ramadan Fast Investigated as Cause of Derailed Train 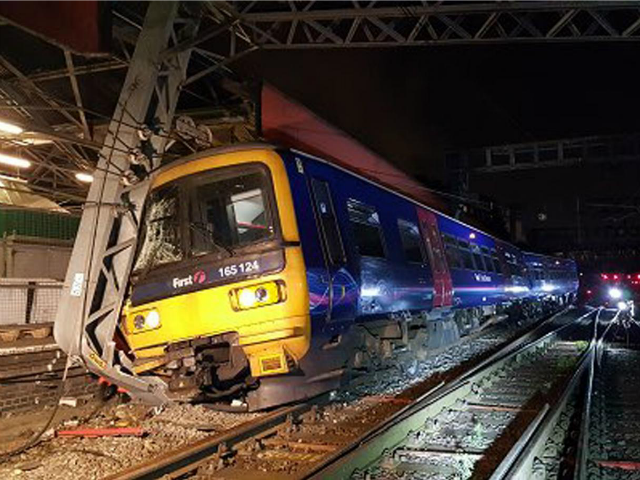 Rail safety chiefs investigated whether a Muslim driver’s Ramadan fast caused a London train to derail. The Rail Accident Investigation Branch (RAIB) report stated that the train’s driver was fasting and woke to eat a light meal at 2.30am the night prior to the incident. It noted that fasting can cause notable problems for people’s concentration. Each year, Muslim countries see a dramatic rise in traffic accidents during Ramadan. During the Islamic holy month Muslims fast during daylight.
The derailment took place in June, at Paddington station, after the train’s driver passed a signal on red.
The train hit a large mast which carries overhead cables, bringing them down, which resulted in the busy station having to close for the rest of the evening.  Blocking the lines at the height of rush hour in the capital, the derailment caused huge delays for commuters.
Some lines were unable to reopen until three days after the accident. The train was carrying no passengers at the time, and the driver was unhurt.
RAIB’s report states that the driver had “awoken during the night before the accident at 2.30am, to eat a light meal, as part of his observance of Ramadan.
“He went back to bed at 3.30am, slept for a further seven hours before coming on duty at 1.07pm and had not had anything else to eat or drink before the accident occurred.”
It adds: “From the evidence available, RAIB is unable to determine whether his interruption in his sleep and subsequent fasting, was a factor in what happened on this occasion.”
The report highlights how research shows the Muslim fast “can affect concentration levels” and lists associated symptoms.
It notes: “Fasting can have a range of effects on individuals including fatigue, dizziness, dehydration and headache, sleepiness and reduction in concentration which can result in safety concerns, especially when conducting safety critical jobs.”
Dubai Police’s Command & Control centre reported that the city saw 7,273 traffic accidents during the first 15 days of Ramadan this year.
The number of traffic accidents doubles in Yemen during the Muslim holy month while police in Saudi Arabia warn that children should be kept inside, so as to avoid being run over by fasting drivers.
Census records show that in 2011 Muslims comprised just under 13 per cent of the population of London. Britain’s capital city elected a Muslim mayor, Sadiq Khan, earlier this year.
breitbart
Eingestellt von Medforth um 6:47 AM