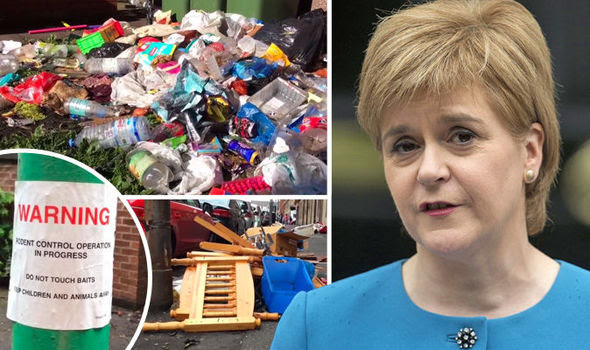 FIRST Minister of Scotland Nicola Sturgeon’s very own constituency has become a haven for illegal immigration and organised crime where women cannot walk the streets, it has been claimed.Pensioners are arming themselves with keys as they are too afraid to go out while police are putting panic buttons inside elderly people's homes to protect them from violent thugs. The slum-like conditions which have sparked protests across the once bustling Govanhill neighbourhood in Glasgow have left the community reeling. Thousands of women have been forced to march in the streets as they are forced to deal with a massive surge in sex attacks.And members of the public have even challenged Ms Sturgeon by filming her in the street. As Scotland's first minister, who earns more than the Prime Minister, parades around Europe with no mandate to negotiate, Express.co.uk can reveal her own constituents are being forced to deal with the fall-out caused by an infestation of rats, cockroaches, filth and squalor. Sex crimes in Scotland have also rocketed by 11 per cent in the last year and 109 people have been reported to the Crown Office for rape and attempted rape in Glasgow alone.The constituency of Govanhill had 3,500 Romanian migrants packed into a few streets of ramshackle tenement blocks in Govanhill, in the south of Glasgow even before the nation’s accession to EU in January 2014. Now the pocket of Glasgow, which Ms Sturgeon only visits with armed police officers in tow, is in meltdown mode. There is no clear information on how many different racial groups are in the broken down community, but figures show that there are 57 different languages spoken by their pupils in schools.Indeed, English is the home language of just four per cent of pupils in Annette Street Primary. A source told Express.co.uk: ”Nicola is ignoring what is happening in her own backyard. "She doesn't live there of course, so she only visits when legally required to hold a surgery. "She lives eight miles away in a plush neighbourhood where the issue of the slum doesn't affect her. "The issues created by mass immigration are shocking but she has turned her back on the community. "There have been issues where groups of migrants have stalked women and raped them - the crime rate is so bad the police have a special code for the neighbourhood."Ms Sturgeon's constituency is known to police as Golf Echo 68 and is now the most violent area of Glasgow. Ironically, when it comes to cracking down on crime while she is in the neighbourhood, Ms Sturgeon who earns a salary of £144,687, has no problem invoking the police to help. She once reported a man to police for staring at her. Detectives raided Dogan Arslan’s home after the First Minister complained he had been hanging about outside her constituency office.The 49-year-old was then grilled by officers for four hours and held overnight, during which time he claims he was denied access to vital heart medication and water. The case against the Turkish immigrant was dropped last year after two-and-a-half years. Mr Arslan told officers he was interested in buying a kebab shop next door to Ms Sturgeon's constituency office when he was arrested and charged for staring at her - which was listed in court papers as "engaged in course of conduct" which caused "fear and alarm". According to locals it takes more than a week for Ms Sturgeon to respond to requests for help.
express
Eingestellt von Medforth um 6:55 AM