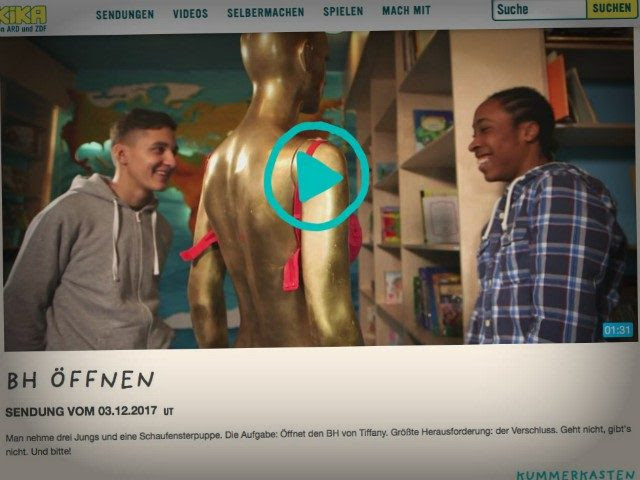 German children’s television channel Kika posted a short video on its website, using teens from migrant backgrounds, to show its underage viewers how to remove a woman’s bra.

The online post, entitled “Open Bra”, has been taken down by the children’s television channel after they received a backlash from many, including Germany’s largest women’s rights organisation Terre des Femmes, Berliner Zeitung reports.
Head of Terre des Femmes Inge Bell said she was horrified by the video which lasted just over one and a half minutes. “This is a completely wrong signal to the Kika target group of three- to 13-year-old children,” she said, and added that it encouraged bad behaviour in boys.
Bell also made note of the fact that the boys involved in the video all came from migrant backgrounds, saying: “This selection has a signal effect, according to the video: migrant boys need special tutoring lessons in bra opening. Especially in times of the #MeToo debate, such an instrumentalisation of migrant boys in the media should be a no-go.”

Breitbart London@BreitbartLondon
"The documentary, which portrays Malvina as madly in love, shows the Syrian telling her to behave modestly, wear less revealing clothing, and consider converting to Islam..." http://www.breitbart.com/london/2018/01/10/migrant-controversial-teen-love-documentary-childrens-tv-channel-adult/ …

An "underage" migrant presented in a German children's channel television programme as being in a relationship with an underage girl is an adult.
breitbart.com

Twitter Ads info and privacy
The video is just the latest scandal involving the children’s television channel. Earlier this month, Kika faced another backlash after it aired a documentary about an underage German girl and her Syrian boyfriend, who claimed to be under 18.
While many took exception to comments made by the Syrian about how his girlfriend should dress more modestly and how Islam greatly influenced his life, the backlash came after it was revealed he was actually an adult.


The situation escalated even further when it was discovered that the Syrian, named Diaa, had liked the Facebook page of radical Islamic hate preacher Pierre Vogel on multiple occasions. Diaa even entered a raffle to win a trip to the Islamic holy city of Mecca with Vogel and another radical preacher.
http://www.breitbart.com/london/2018/01/27/german-childrens-television-channel-migrants-remove-girls-bra/
Eingestellt von Medforth um 4:59 AM