Angela Merkel has attacked the “poison” of right-wing populists, slammed the building of “walls”, and defended free movement and globalism during her speech at the World Economic Forum in Davos.

The German chancellor’s attack comes after the populist Alternative for Germany (AfD) party surged in the German Federal elections, leaving her struggling to form a government, and shows her tone has changed little since the 2015 migrant crisis that preceded the election humiliation.
She slammed “protectionism” and said that a hundred years after World War One leaders had “sleep-walked” into another catastrophe, with a resurgence of national democracy and a faltering of the European Union (EU).
View image on Twitter 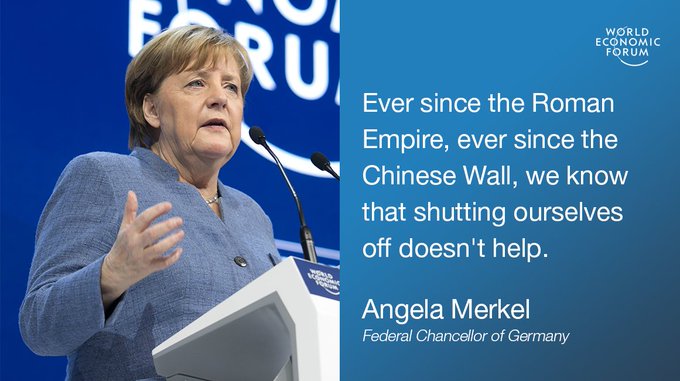 
“Have we actually learned the lessons of history? We haven’t really,” she said, claiming the supranational projects that followed World War Two were fading. “We see populism on the rise, we see a polarising atmosphere, and a polarising state of affairs.”She said she wants a partnership with the UK after Brexit, but insisted “the question of accessing the Single Market is linked with Free Movement. We can’t make any compromises there,” she added, in what appeared to be an indirect reference to negotiations.
Nations seeking to close their borders with physical barriers and guards are a large problem, she added.
“Ever since the Roman Empire, ever since the Chinese Wall, we know that shutting ourselves off doesn’t help to protect your borders. You also need good cooperation with your neighbours, you need good agreements, valid agreements, that are respected.”Mrs. Merkel is still struggling to form a ruling coalition following elections last September. Her liberal-conservative party and the Social Democrats had their worst election performance in modern history, whilst the anti-immigration AfD surged to 12 per cent and entered the legislature for the first time.
She insisted her government would get right-wing populism “under control, but it is a poison” linking the political movement with the use of “stereotypes”.
The chancellor said: “When you say Americans are protectionist by nature, Germans are tight-fisted by nature, you are generalising. The next thing is Muslims are like this, Christians are like that.
“If you do not respect each person’s individuality, and already have your pre-conceived notion before you even talk to them, that is the very basis of populism.
http://www.breitbart.com/london/2018/01/24/merkel-davos-attacks-walls-poison-populism-defends-globalism/
Eingestellt von Medforth um 11:01 AM