Andreas and Sandra have been living for months in a forest near Höhenberg, Cologne. Although they visit the city’s housing office every week, there isn’t a house for the homeless couple.
View image on Twitter 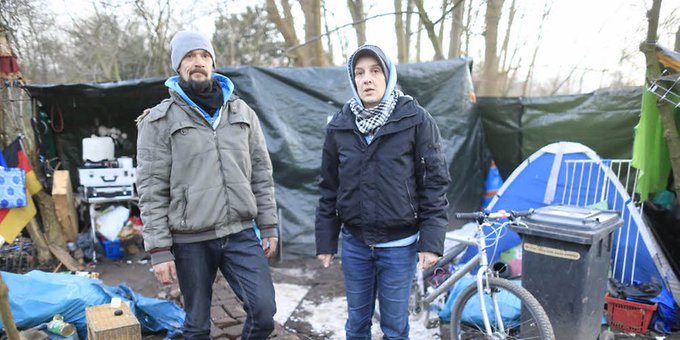 Stan@StanM3
Germany- City of Cologne can't find an apartment for a couple. They are forced to live in the woods.https://translate.google.com/translate?hl=en&sl=de&tl=en&u=https%3A%2F%2Fwww.ksta.de%2Fkoeln%2Fstadt-findet-keine-wohnung-obdachloses-paar-aus-koeln-wohnt-im-wald-29773824 …

Twitter Ads information and privacy
Sandra lost her house after her husband died from sudden meningitis. Andreas became homeless after an argument with his ex-wife’s son.
They met each other two years ago when they were already homeless. Misery brought them together and want to stay together. That’s why they have decided to live in the open air, a shelter would break the couple up as there are only separate shelters available.
At night it’s cold, sometimes -3s Celsius. They use a gas bottle to warm up the tent a bit and a bucket is their toilet. The tent is placed between “the mice and the garbage” according to them.
Andreas has already lost more than ten kilos as the conditions are very tough. They don’t have running water, so they carry a canister of water from a nearby gas station into the forest every day.


Earlier they camped in a forest near Merheim and now Höhenberg. It’s unclear when their situation will change, as the migrant crisis made Germany’s housing crisis worse.
https://voiceofeurope.com/2018/02/andreas-and-sandra-live-in-a-german-forest-as-theres-no-house-for-them/
Eingestellt von Medforth um 1:28 PM