The Essen non-profit is one of 930 "Tafel" food banks across Germany. They collect food that is nearing its expiration date from restaurants and supermarkets. People who are unemployed or on welfare can sign up to receive free groceries for their families at a specified time once a week. The "Tafel" is an NGO as and as such is not the last stop between needy families and hunger, which is the responsibility of the state and national governments. On Thursday, Manager Jörg Sartor stated that as the number of foreigners had increased to 75 percent of the food bank members, elderly Germans were becoming too frightened to participate in the program.

"I was approached several times because there was too much pushing and shoving,"

The ban on new sign-ups was expected to last a few months, and will end before the summer. However ,the left in Germany wasn't happy and last night the very people who love to play the abuse card (he called me this, he called me that) in which to gain attention did just that by daubing Nazis graffiti across the food bank and its vehicles in which to make sure that nobody else will challenge their views: 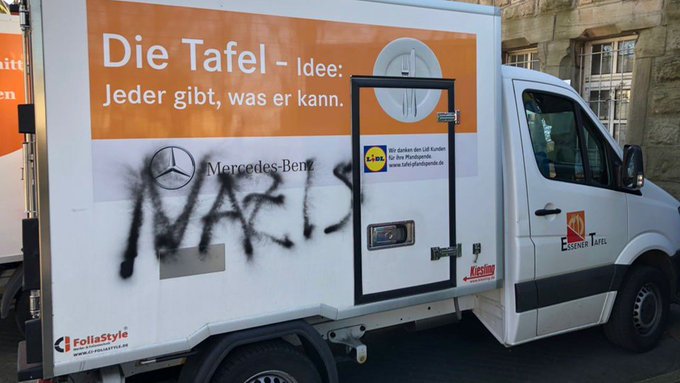 Elizabeth Schumacher@ElizSchumacher
At least six vans were defaced after a food bank in Essen, Germany said they would not give new membership cards to foreigners (image @WDR)

Sator called the damage to property according to WAZ "a mess", but announced that he would not remove the labels. "We will not get rid of that, let everyone see what kind of idiots there are in the world."

Anybody else notice how the most intolerant people out there are actually those who claim to find it everywhere they look.