Hungary adopts resolution to support Poland in clash with EU

The Hungarian parliament has adopted a resolution which supports Poland in their clash which the European Union. Earlier the European Commission triggered the Article 7 of the EU Treaty against Poland because of Poland’s new judiciary law.
Sanctions on Poland can only be imposed with the support of all EU members. Hungary has now pledged to veto any punitive measures by the EU against Warsaw.
View image on Twitter 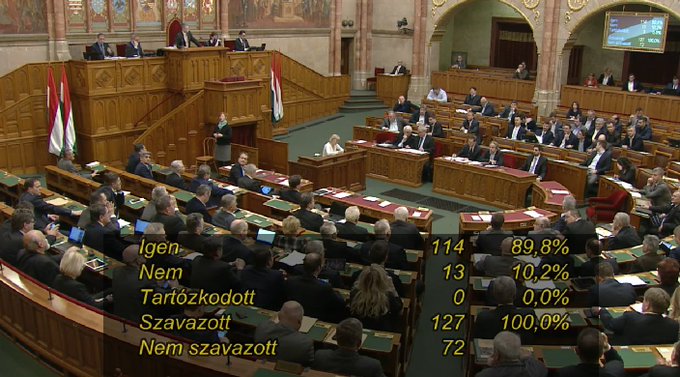 Twitter Ads information and privacy
The new resolution, that was supported by 114 MPs reads:
“We are calling on the Hungarian government to support Poland, to prevent the rights guaranteed to Poland under EU Articles from being diminished, and to oppose proposals which would restrict the fundamental rights Poland enjoys as an EU member”.
“We Hungarians, similarly to the Poles have joined the EU of our own free will. We did this with trust that we were joining a community based on values such as law, justice and freedom.”


Hungary and Poland no longer stand alone in their opposition against the EU. For example Austria, Bulgaria and Croatia earlier criticised the EU’s stance on migration.
https://voiceofeurope.com/2018/02/hungary-adopts-resolution-to-support-poland-in-clash-with-eu/
Eingestellt von Medforth um 7:29 AM