Italy’s populist Five Star Movement has demanded European Union (EU) bosses “defend democracy” after Germany’s EU Commissioner appeared to threaten voters, telling them that the “markets will teach the Italians to vote for the right thing”.

MEP and former UKIP leader Nigel Farage also intervened, slamming Commissioner Gunther Oettinger’s comments as “disgusting bullying”.Eurosceptic populists were the victors in Italy’s recent election, and when they tried to form a government over the weekend, the Italian president thwarted their efforts, making a second vote likely.
Mr. Oettinger’s threatening comments were initially reported in a tweet from Deutsche Welle journalist Bernd Thomas Riegert, who had interviewed the Commissioner. However, the reporter then deleted the tweet and revised the comments following a backlash. 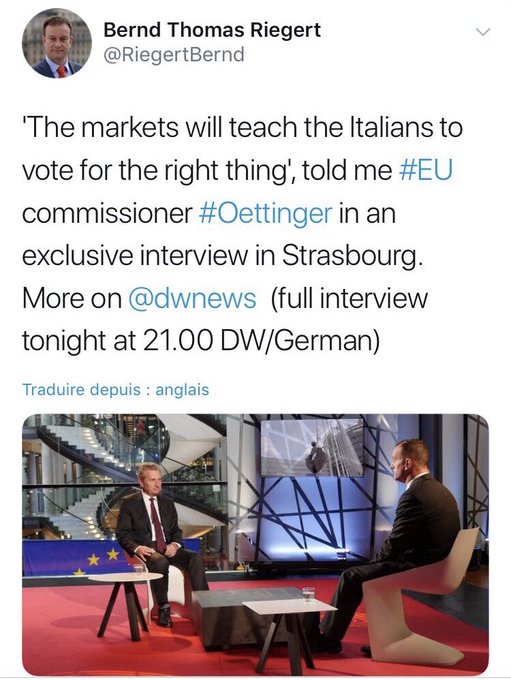 
In a reworded tweet, he claims Mr. Oettinger had, in fact, said: “The markets and a ‘darkened’ outlook will teach Italy’s voters not to vote for populist parties in the next elections.”
The Commissioner is also quoted as saying: “I can only hope that this will play a role in the election campaign.”
The official Twitter account of Italy’s Permanent Representation to the EU also hit back, responding to Mr. Bernd’s tweet:
“Italian voters do not need any teaching. Free #elections and #democracy are key European values. #Respectmycountry”
The account added: “Italian democracy shall be respected by everyone. As always in our Republican history, Italians will vote freely and independently #Respectmycountry.”
Moments later, the populist Five Start Movement released a statement, calling on the President of the European Commission, Jean-Claude Juncker, to “retract immediately Commissioner Oettinger’s comments”.
“His words are of unprecedented gravity and the evidence of the obvious manipulations that Italian democracy suffered in recent days,” the party added.
Continuing: “Juncker must intervene to defend democracy, the popular and the voting right of all citizens. It cannot be for German Commissioner to tell how the Italians must vote [and] neither should [it] be any financial speculator.”
Mr. Juncker’s own record of defending the democratic process in the EU has been questioned, and following the 2015 financial crisis in Greece he told voters: “There can be no democratic choice against the European treaties.”

Sergio Mattarella rejected Italy’s populist coalition government over a eurosceptic minister in one of the worst days in Italian political history.
breitbart.com