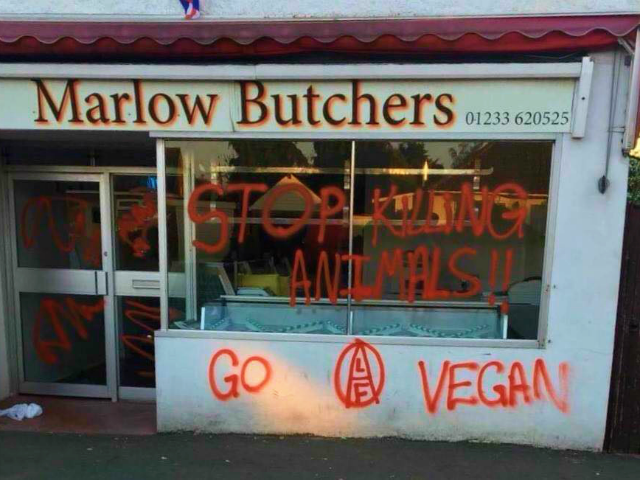 Staff at a family-run butcher shop in Kent are “living in fear” after vegan extremists threatened to firebomb the business as attacks by animal liberation activists are on the rise.

Marlow Butchers in Ashford, Kent, was first attacked earlier this month when activists covered the shop front in red graffiti including the logo of the Animal Liberation Front (ALF), a leaderless “direct action” animal rights extremist group founded in the UK in the 1970s and deemed by the U.S.’s FBI as part of the “eco-terrorist movement”.
The butchers have since been hit by a barrage of negative campaigning online and threats of violence, with some comments being personal in nature, reports Kent Online.
“On the internet it has been very threatening,” said Wayne Marlow who runs the business with his brother and father.
“It has got ridiculous – activists from as far away as Australia are getting involved.
“The internet is the worst thing as not only are they threatening to physically destroy our business, but they are also trying to ruin our reputation online, too, by leaving negative reviews and comments.
“They want to close us down and people are threatening to smash the windows or petrol bomb the store.
“We live in fear and we’re up worrying at night – they are terrorising us.”


Police are said to be investigating the report of “malicious communications and harassment” at the Ashford business which has been serving its local community for 54 years.A representative from the UK’s Countryside Alliance – a body that promotes issues related to the wildlife, farming, hunting, and local business – has said that there has been a rise in attacks on butchers and abattoirs.
Countryside Alliance Chief Executive Tim Bonner told The Telegraph: “There’s been an escalation of attacks on butchers, markets, and even abattoirs and it’s an extension of animal rights campaigns we have seen around other areas, using the same tactics including online abuse.
“They usually attack small independent businesses rather than taking on the big boys – it’s quite cowardly.”
In 2004, the FBI gave evidence to a Senate Judiciary Committee on animal rights extremism stating that the ALF was engaged in the “fanatical harassment of employees” and had “become the most active criminal extremist elements in the United States” in the early 2000s.
The U.S.’s domestic and security services noted a concerning “escalation in violent rhetoric and tactics” of the often small cells, graduating onto the “employment of improvised explosive devices against consumer product testing companies, accompanied by threats of more, larger bombings and even potential assassinations of researchers, corporate officers and employees”.In 2006, an ALF bomber was jailed for 12 years in the UK for planting home-made bombs outside the homes of a director of a courier firm and a senior pharmaceutical company executive with links to drugs-testing laboratory Huntington Live Sciences, leaving victims “living in a state of fear”.
The American far-left ‘civil rights’ Sothern Poverty Law Center, which recently had to remove its Field Guide to Anti-Muslim Extremists from its website after British anti-extremism campaigner and Islamic reformer Maajid Nawaz threatened to sue over his inclusion on the list, criticised the FBI and ATF over the term “terrorist”, saying that “for all the property damage they have wreaked, eco-radicals have killed no one”.
http://www.breitbart.com/london/2018/05/28/vegan-activists-threaten-fire-bomb-butchers-animal-rights-attacks-rise/
Eingestellt von Medforth um 3:44 AM