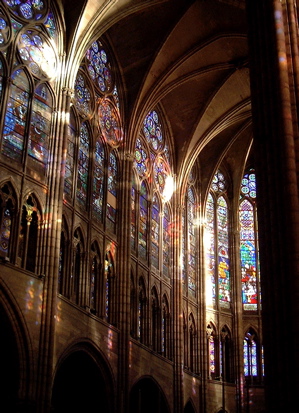 
The over 800-year-old Basilica of Saint-Denis in France was heavily vandalised this week, with vandals smashing stained glass windows and severely damaging the nearly 200-year-old organ.

The destruction was discovered on Sunday morning by the basilica’s organist, who found that the engine of the organ had been damaged along with other parts of the massive instrument, designed between 1834 and 1841, Le Parisien reports.

Saadia Tamelikecht, head of the departmental unit of architecture and heritage of the heavily migrant-populated Seine-Saint-Denis suburbs, said the damage to the instrument, which has been recognised as a historic monument of significance in France, was major.The vandalism was likely done, according to Tamelikecht, as a result of someone hiding within the instrument and smashing their way out.On Tuesday, even more damage was discovered, with two stained glass windows having been smashed along with two locks that had been pried open. The windows were created in the 19th century, rebuilt after the destruction of the French revolution. Police say they are investigating the incidents.

The vandalism comes just under a year after the Basilica was stormed by far-left activists and illegal migrants who occupied the place of worship to protest a law directed at curbing illegal migration into France.The Seine-Saint-Denis area, which comprises of a number of suburbs to the north of Paris, has been described by some as a no-go zone.

The accusations of danger were affirmed in 2017 by French courier Chronopost, which ended home deliveries in the area citing danger to their delivery staff.The acts of vandalism are just the latest to affect a Christian place of worship in France. Last month the country saw nine churches desecrated and vandalised in only eleven days with tabernacles overthrown, fires lit, and in one case in Nîmes, faeces smeared on the walls.

The series of incidents provoked an outcry from many including Cardinal Robert Sarah, the prefect of the Vatican Congregation of Divine Worship.The Cardinal took to Twitter to express his thoughts on the incidents saying, “The acts of desecration and vandalism in the churches are highly reprehensible.”

“They are the sad reflection of a sick civilisation that lets itself be swept away in the nets of evil. The bishops, priests, and the faithful must keep up their strength and courage,” he added.